I was mesmerised. As if I was watching a Newton’s Cradle. A ballerina in a musical box. Or a really good GIF.

Executive Chef Leonard Delgado is making sweet music from outside his open kitchen. Wearing his uniform black and his goatee grey, the bespectacled conductor raises his left hand, and his orchestra of chefs and maitre d’s gets right to work on the next movement of this gastronomic symphony.

This is where the magic happens.

Under a sort of an inspo wall, where the words “WORK HARD” are hard to ignore, Chef Delgado and co are, well, working hard to serve their guests the best damn fried chicken this

writer has tasted in a while. Maybe ever.

After all, this is The Bird Southern Table & Bar. Yes, it is famous. Founded by John Kunkel, the award-nominated restaurant from Miami (it’s called Yardbird Southern Table & Bar there) joins the ranks of Gordon Ramsay’s Bread Street Kitchen, Wolfgang Puck’s Cut and Tetsuya Wakuda’s Waku Ghin at Marina Bay Sands. But also, David Beckham has been spotted here. (Not by yours truly, alas.)

As you might gather from its name, hearty homey fare from southern America — think juicy fried chicken and waffles, buttermilk biscuits and pork ribs — are highlights of an extensive menu. Like I said, hearty. The kind of meal that’s best enjoyed with a massive table full of your favourite people. It’s a celebration. You’re trading stories and gossip. You’re laughing and you’re giving out hugs congratulatory and sympathetic. You’re snapping pictures and you’re snapping at one another — ah, family.

Whatever it is, there’s fried chicken within reach that can only make it better. And this is fried chicken whose recipe — Grandma Kunkel’s — is 100 years old. A plate of those, thighs, wings or breasts, with waffles and watermelon, and life is pretty good.

Upstairs, where I’m seated, the vibe is quite contrary to the buzzy atmosphere on B1. There, it is warmly, softly lit with an orange glow like sunset. Families with children seem to make up the demographic. Here, ah, here on ground level is where they keep the light. It’s a rainy Sunday morning, but not even the raindrop-mosaicked windows can keep the gorgeous light away. It’s more relaxed here. Smaller space. Smaller tables. No kids in sight. I like it. Anyway, it’s just us two, my friend Am and I. 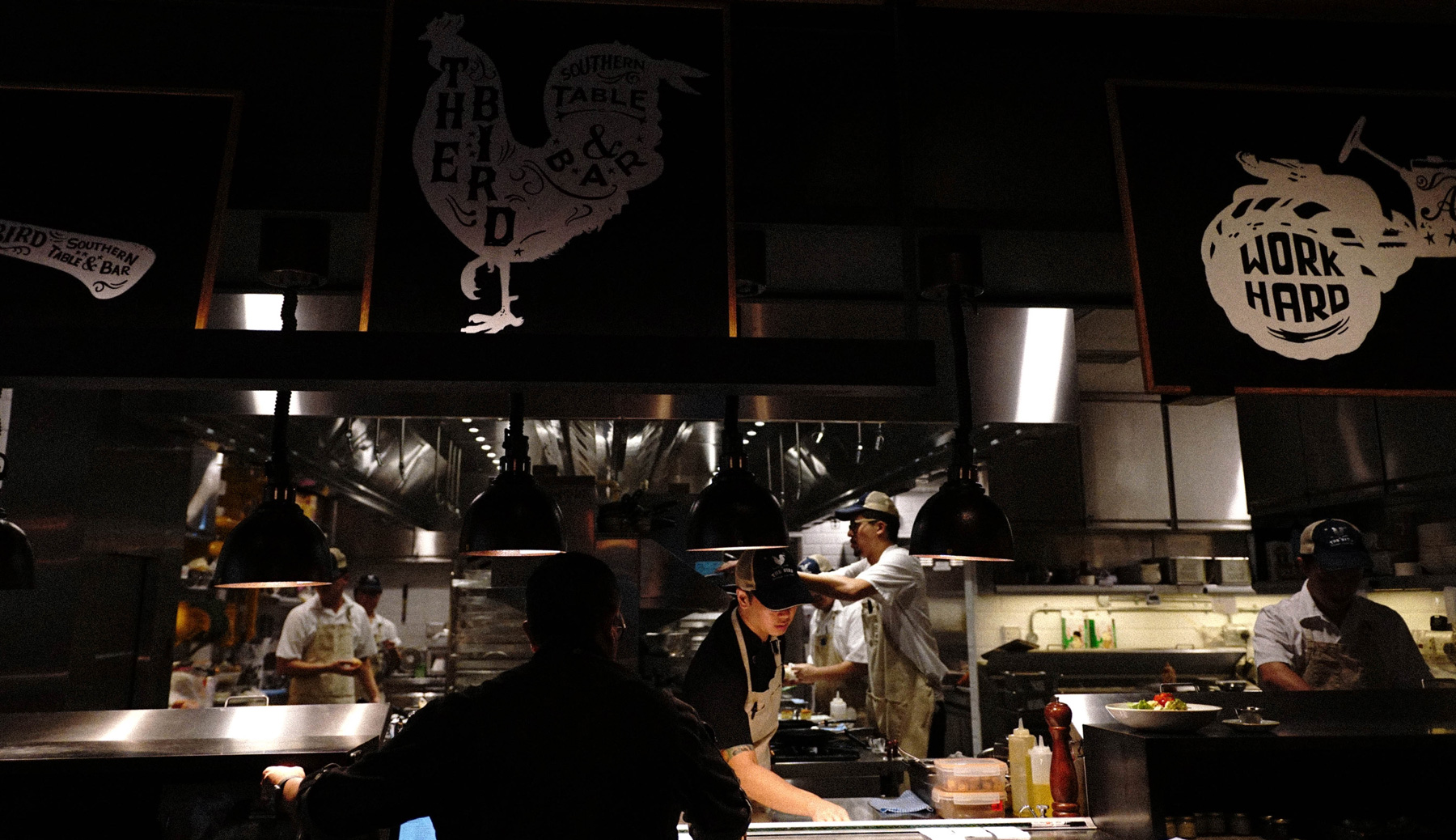 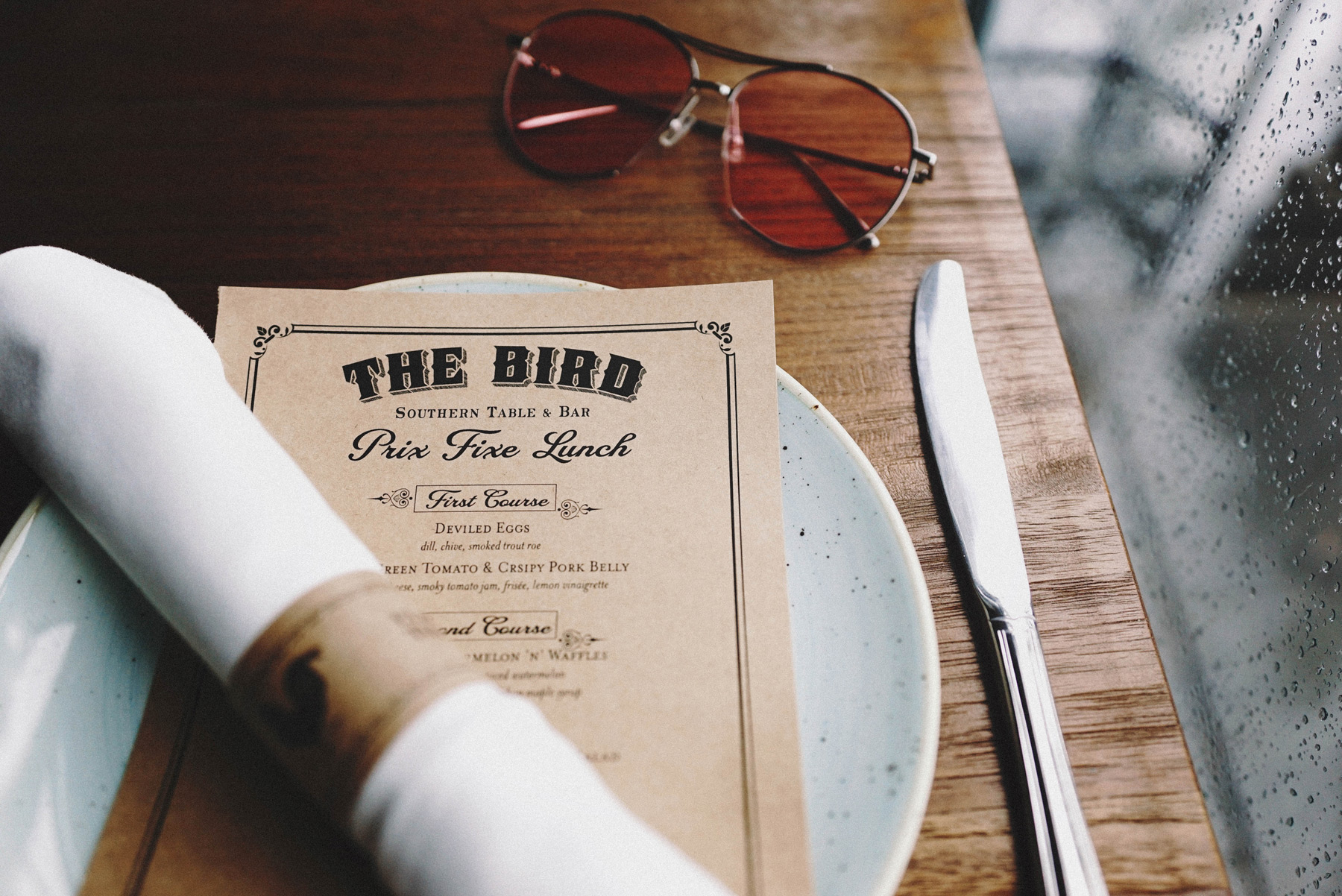 But it is Sunday, so I throw caution to the wind.

My camera also prefers it here for obvious reasons.

From the Prix Fixe menu, we make our choices such that, between the two of us, we’ll get to try a bit of everything. Most of The Bird’s signatures are present. Deviled Eggs or Fried Green Tomato & Crispy Pork Belly to start. Chicken ‘N’ Watermelon ‘N’ Waffles, Macaroni & Cheese or Grilled Mango Salad for Course No 2. I can’t resist ordering a basket of Mama’s Classic Buttermilk Biscuits in addition. They say the best decisions are often the ones you make with your gut — even though the consequence, as in this case, may not be in your gut’s favour, literally (food baby alert!)

But it is Sunday, so I throw caution to the wind, and I eat these amazing (OMG!) biscuits to my heart’s content. I honestly don’t think I have stopped craving them since.

Next, dessert. By this point, we have entered into Food Coma Zone, and the very thought of having another crumb should be prohibited. Yet, to surrender something called Fried Oreos feels like a misdeed even more unforgivable. So we did. Yeah, we did. I don’t remember much of what transpired after my last morsel of that plate of sorcery. Only that the incredibly loud and extremely close country music still rang in my ears.