When he kissed me, he said, ‘This has to be forever.’

Lynn Yeow has quite the tale about her wedding. She remembers it like it was yesterday. As she slips into her first Vera Wang dress, the Georgina (below), for our shoot at the InterContinental’s resplendent Presidential suite, the PR doyenne regales us with every detail.

“Everything that could have gone wrong, did,” she begins. Snow storm: Check. Blackout and flooding at the hotel: Check. Friends and family being stranded at various airports: Check. It was mayhem. Quite possibly every bride’s worst nightmare. But like an ending that befits a fairy tale, love triumphed. In the end, the sun dutifully showed up as the spell of foul weather broke, birds sang (okay, we embellish), everything worked out to make a beautiful wedding happen for Lynn and Beppe De Vito — under the Venetian sky, no less.

For some people, looking for love may feel like an attempt to locate a needle in the haystack — or the cat among the owls. Others, the lucky

ones, find love right where they are. Lynn and Beppe are the lucky ones.

The decade-long love story between the co-founder of Sassy Mama / former executive director of The Ate Group and the force behind the Il Lido Group began with some of the best things in life: Food and friendship. (Didn’t Nietzsche say that it is not a lack of love, but a lack of friendship that makes unhappy marriages?) She is a lover and connoisseur of food. He is a restaurateur from Italy. They were colleagues who forged a friendship from their mutual passion, and friendship turned into love.

“It just felt really comfortable and right,” says the 37-year-old.

Perhaps it is that simple. After all, the power couple seems to have found their perfect recipe for a successful, happy marriage. Because eight years and four children later, the love, as The Rolling Stones say, is strong.

IN COLLABORATION WITH VERA WANG AND THE CANARY DIAMOND CO.

How did you and Beppe meet?
Lynn Yeow-De Vito: We started out as friends. We’ve always shared similar interests, especially in food and travelling. When he was going through a divorce, we started to hang out more — he confided in me, and I was there to support him. I think all that eventually brought us closer together, and our friendship blossomed into romance. The rest, as they say, is history.

Do you remember the moment you fell in love with him?
LY: There wasn’t really a specific moment. Maybe it was because we had been friends for so long — it just felt really comfortable and right.

Where was your first kiss?
LY: It happened at Beppe’s house. Gosh, it was almost 10 years ago! It was so sweet — when he kissed me, he said, “This has to be forever.”

What is the best gift that Beppe has ever given you, and you, him?
LY: Our four children! And hopefully more to come… although, I don’t think he is thrilled with the idea (laughs).

What about him are you most attracted to?
LY: His confidence. He dives head first into whatever he wants to achieve, and he works hard towards success. He is not afraid to fail — if and when he does, he picks himself up and gets right back on first gear again.

Let’s talk about The Proposal — how did that happen?
LY: Haha, it isn’t your typical romantic story. It was quite practical. We were preparing for bed one evening when he turned to me and asked, “Shall we get married?” And because he knows me so well, he knew not to buy me a ring yet, in case it wasn’t to my liking. So he told me what his budget was and asked me to buy one that I liked. ☺ 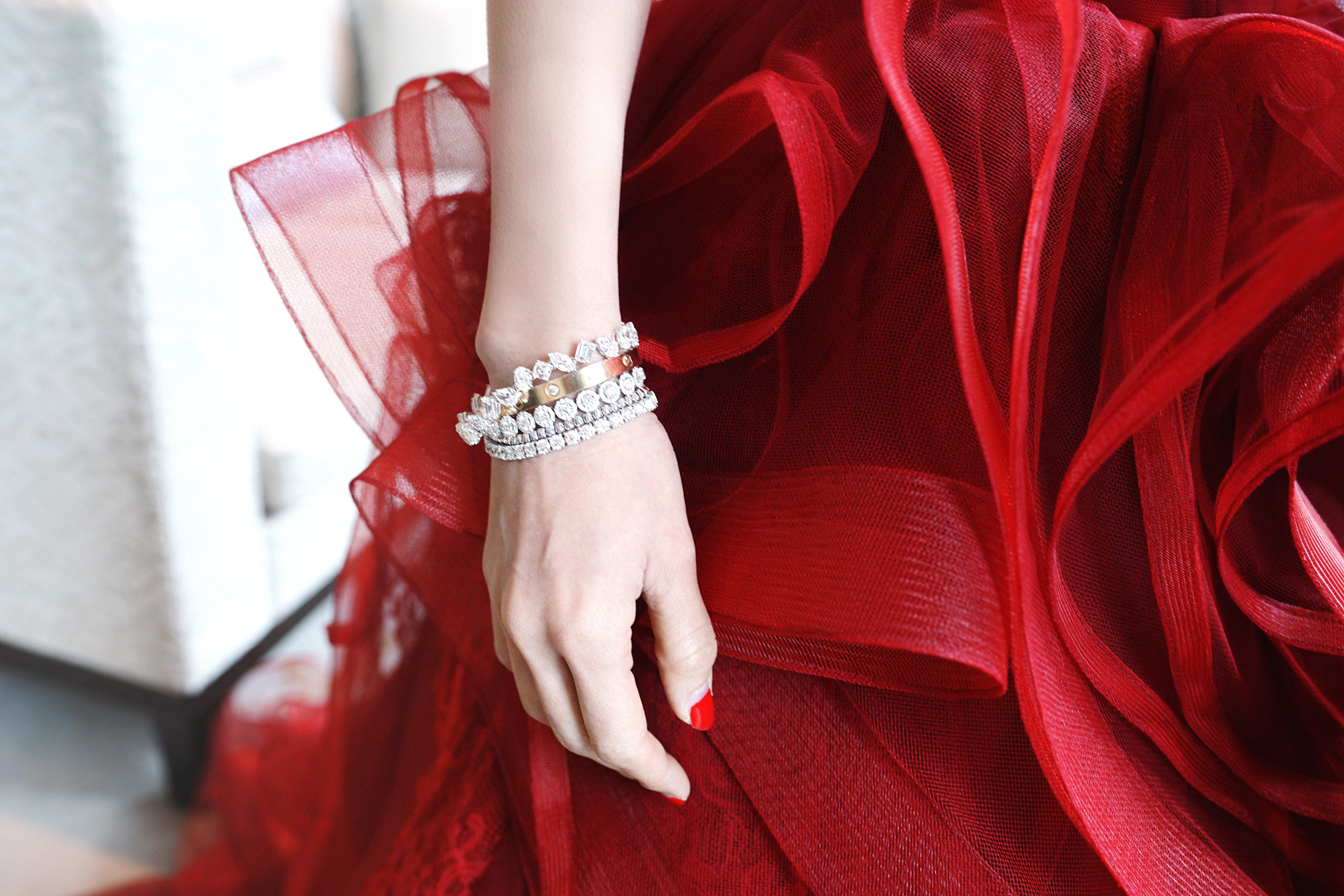 We experienced one of the heaviest downpour of snow, and all our dearest friends and family braved the storm to make it to our wedding!

That’s actually pretty cool. So tell us about the ring.
LY: It’s from The Canary Diamond Co. I went to them because I trust Steven (then general manager) and his dad (founder William Lam) with their expertise and recommendations. I knew I wasn’t the round-diamond kind of girl. I was more interested in marquise stones and the process.

Anyway, in the end, I didn’t use up the budget Beppe gave me — I thought I could upgrade it down the road. Regret! Hahaha! But seriously, I have very sensitive and allergy-prone skin, I could get a rash from wearing even platinum jewellery, so my husband is a very lucky man — he doesn’t have to worry too much about buying me jewellery!

We want to hear all about your gown, too!
LY: I wore a couture gown from a very good family friend — she is a woman I’ve always looked up to. It was a beautiful gown she got from Paris when she got married.

WE WERE PREPARING FOR BED ONE EVENING WHEN HE TURNED TO ME AND ASKED, ‘SHALL WE GET MARRIED?’ 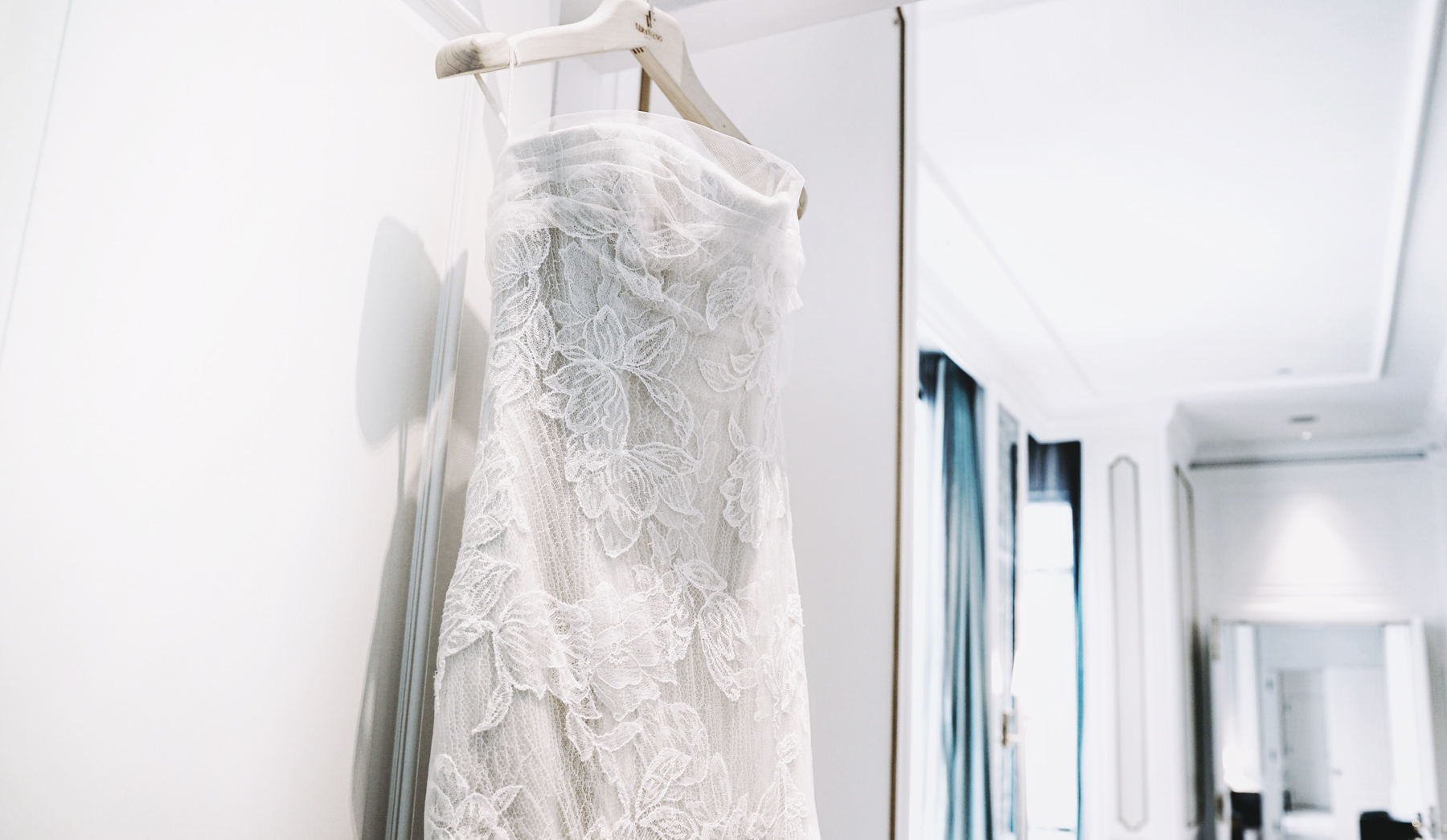 We fight and argue with as much passion as there is in our relationship — maybe that’s the secret?

MY HUSBAND IS A VERY LUCKY MAN…

And what was the wedding like?
LY: We had two small parties. One at Forlino (which Beppe used to own) for 80 people. That was also a solemnisation ceremony.

The other one was held at Hotel Danieli in Venice. We experienced one of the heaviest downpour of snow, and all our dearest friends and family braved the storm to make it to our wedding! Many of them were stuck in different airports because of the weather. The ceremony had to be moved to another location within the hotel because of the flood in the lobby. Then there was a blackout. My best friends had to hold up torches for my make-up to get done. Basically, whatever could go wrong, went wrong! 😱 But in the end, the sun came out, the snow stopped, and it turned out to be more beautiful than we could expect. It was unbelievably awesome.

What kind of a bride-to-be would you say you were?
LY: Super chill!

Almost a decade after That First Kiss and four children later, what is your secret to keeping the love and passion alive?
LY: I believe I have found my soulmate in life, and it comes so naturally that I don’t think about how we have kept our love alive. But here’s a fun fact: We fight and argue with as much passion as there is in our relationship — maybe that’s the secret? (Laughs.)

Vera Wang is located at The Shoppes at Marina Bay Sands #1-29A. The Canary Diamond Co is located at 402 Orchard Road, Delfi Orchard.